Our Vision: to Catch a Glimpse of God’s Kingdom in Community

Jesus prayed, “thy will be done on earth as it is in heaven.” We believe that through faith in Christ and by the power of the Holy Spirit, we can catch glimpses of God’s perfect heaven in our communities here on earth, both within our church and beyond its walls.

Our Mission: to Make Disciples of Jesus Christ for the Transformation of the World

We believe that God wants more than our belief or trust, God wants all of us. By the power of the Spirit, disciples of Jesus live and love more and more like Jesus. They also work in their families and communities to transform the world we live in.

We are committed to reflecting the life, words, way, and spirit of Jesus and inviting others to do the same.

We are committed to the personal and corporate study of Scripture.

We look to the Bible’s story in order to understand our own.

Transformed by the Spirit

We are each on our own spiritual journey of discipleship, guided and empowered by the Holy Spirit. However, we also acknowledge that we need each other to complete that journey.

We strive to meet the holistic needs of our community and the people in it.

We strive to meet people where they are, with hope for salvation but without expectation or judgment.

We treat everyone as bearers of God’s image and as cherished members of God’s fmaily regardless of age, gender, race, nationality, sexual orientation, ability, or legal status.

We cultivate and celebrate everyone’s unique contribution to the church’s life and work.

We strive to think the best of each other. 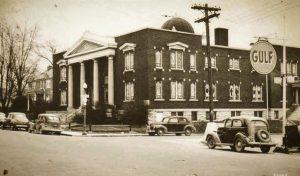 As was usual in pioneer times, the first meeting place of Methodists in Somerset was a log home, which oral history tells us was on North Vine Street. The exact location is not known. Before 1830 a Methodist preaching circuit had been established in the county, with ten or twelve preaching points, of which Somerset was one.  Bishop Joshua Soule was the presiding bishop and one of the county’s rural churches was called Soule’s Chapel.  This became known as “The Mother Church” of our church because so many of its members eventually joined the Somerset Church.

The congregation erected its first church building on South Main Street in 1846 and it was called the Main Street Methodist Church. The lot was donated by Mr. John Curd.  In 1866, the minister serving at that time felt that the church should be divided. So the Methodist Episcopal Church (Northern Church), erected a church on East Mt. Vernon Street on the lot where the Virginia Theatre now stands and this was used until about 1918.  This congregation; however, eventually became re-affiliated with the Methodist Episcopal Church South, thus coming full circle.  The South Main Street Church (Methodist Episcopal Church South) continued to grow, and in 1917 under the leadership of Rev. W. L. Clark, a new and larger building of brick, in the neo-classic style, popular at the time, was erected on a lot, at the corner of East Mt. Vernon Street and Central Avenue.

This lot was given by Joe H. Gibson, the great-grandson of Mr. John Curd, who had given the lot for the first Methodist Church. This building continued in use until the present sanctuary was built in 1959 under the leadership of Dr. Ralph G. Wesley. The first service of this new sanctuary was conducted by Bishop Walter C. Gum on December 18, 1960. A new educational wing was dedicated in 1975 by Bishop Frank L. Robertson, Ralph Wesley, District Superintendent and Harold E. Henson, Minister. Another educational wing, which occupies the space of the 1917 structure that was torn down in 1973, was completed in 1979 under the ministry of Dr. Walton Gardner.

We have a beautiful symbol on the outside of our sanctuary. It is a tall tower reaching skyward.  It symbolizes the trinity, as sets of threes are used in the construction. The circle at the top represents eternity. You may also notice that at the top of this tower, the cross can be seen from a distance at any angle and reaches out to our community.